Former Vice-President of Ecuador Jorge Glas went on hunger strike after he was transferred to the prison of the strict regime of Latacunga, said the lawyer of the Glace Eduardo Franco Loor.

“We inform the country and the international community that former Vice-President Jorge Glas is in a deplorable, inhuman condition, so he went on hunger strike. We betray the responsibility for my client’s life and his physical condition on the authorities,” Franco Loor said in his Twitter account after he announced that his client had been transferred to another prison. It is reported by Telesur TV. 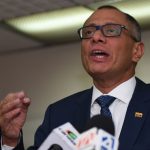 “The national government is transferring former Vice President Jorge Glas to laracunga prison, violating his human rights and taking responsibility for his life as he is in a bad condition,” Franco said.

The lawyer stated that his client’s transfer violated the rights of the former Vice-President, as his case was still being discussed in the court of Cassation.

This month, the first year of Glace’s prison term ended. In total, he must serve six years in prison. In December 2017, an Ecuadorian court sentenced former Vice President Jorge Glace to six years in prison for criminal activity with the Brazilian construction company Odebrecht. The court found that Glas was guilty of criminal conspiracy with Odebrecht and receiving “kickbacks” from her.