Kenyan referee Aden Marva  has received a lifetime ban because of corruption: iacoi the decision was made by the Disciplinary Council of the African football Confederation.

Kenyan judge was supposed to go to the world Cup in Russia, and eventually received a lifetime ban on work as a referee after he was convicted of bribery

Earlier, a video about corruption in African football was published on the BBC. On the screen except judges from Ghana,” was lit ” and the referee from Kenya.

Video journalist from Ghana Aremeyaw ANAS, , posing as a football official from Ghana, tried to bribe the referee Aden Marwa during the African national championship. He agreed to a bribe. The video was most likely made during the Africa Cup 2018, which was held in Morocco in January and February. In the video, you can hear the judge say to the person who gave him the money: “Thank you for the gift, but the most important thing is friendship, acquaintance with each other.”

The video shows Marva, along with dozens of other match officials and senior football administrators, receiving money, in violation of FIFA’s code of ethics. At the same time, it has the official referee uniform complete with the FIFA logo.

The disciplinary Council of the African football Confederation also banned 10 other judges involved in corruption scandals from working as referees for a period of two to ten years. Another 11 judges were suspended until 5 August this year, when another meeting of the disciplinary Council will be held, 10 of them representing Ghana. 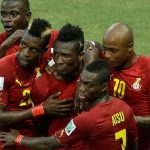