The Chairman of Korean Air, the largest group of airlines in the country, Cho Yang-Ho was charged with embezzlement and breach of trust.

Cho is the last head of a major business group to face legal challenges in South Korea after President moon Jain took office in 2017 with a promise to curb the excessive power of family conglomerates and improve their governance, Reuters reports.

Earlier this month, the South Korean court of appeal found the Chairman of the Lotte Group guilty of charges including bribery and breach of trust, but suspended his prison sentence by releasing him. In February, a lower court sentenced Shin Dong Bin to two years and six months in prison for his role in the scandal that eventually led to the overthrow of former South Korean President Park Geun-Hye. The de facto leader of the Samsung group JJ. Lee was also found guilty of corruption in the same case. Li and Shin were currently awaiting decisions of the country’s Supreme court after being released from prison by the lower courts. 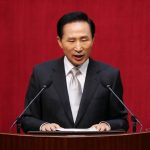 Seoul Prosecutor’s office said that from 2003 to 2018, Cho received a Commission of 19.6 billion won (us $ 17 million), creating a trading company for brokerage transactions for the purchase of aviation equipment and duty-free goods during flights to Korean Air, as a result of which the airline lost this amount.

Also, Emily Cho, the youngest daughter of the head of the airline, was dropped all charges related to her splashing a drink on the two participants of the business meeting in April, because the participants did not want to press charges, the Prosecutor’s office of the southern district of Seoul.

The eldest daughter of Chairman Cho, Heather Cho, was imprisoned in 2014 for what demanded the return of the aircraft Korean air lines at the airport in new York due to the fact that she was served the nuts in packaging instead of on a platter.