Members of the Left workers party nominated the former head of state, Luis inácio Lulu da Silva, who is serving a prison sentence in a corruption case, as a presidential candidate.

The workers ‘ party insists that Luis Inacio Lula da Silva  is the only candidate to be declared from the party. Their goal is to provide enough popular support to force the court to release da Silva and allow him to participate in the campaign, the New York Times reports.

Now the party representatives need to register the candidacy of the ex-President in the Supreme electoral court of the South American Republic. This must be done no later than August 15. However, the court is likely to deny Lula da Silva the right to participate in the electoral race – in accordance with national legislation, a person convicted by the court of second instance following the results of the criminal process cannot apply for elected positions.

“Lula is innocent, so we will not accept other candidates,” Senator and Chairman of the party, Glacey Hoffmann, said in a recent interview. “We see his conclusion as a political persecution,” Hoffmann said.

Many of his supporters agree. In anticipation of the party on the occasion of the announcement of the presidential candidate from the party faithful, the members went on hunger strike and promised to organize a March in the country’s capital Brasilia at the end of this month, when the party officially register their candidates at the Supreme electoral court.

In Rio de Janeiro, tens of thousands took part in the Free Lula concert, where some of the country’s most popular musicians performed outstanding ballads.

Recall, da Silva was arrested in April 2018 after a dramatic confrontation with the police , during which he said: “I will not stop, because I’m not a man, I’m an idea.” He became the first ex-President of Brazil, who was sentenced to 12 years in a criminal trial. At the end of January, the court of appeal upheld the conviction in the politician case, increasing his prison sentence from nine years and six months to 12 years and one month.

Lula da Silva, who is accused of other corruption episodes, according to opinion polls, takes the place of a favorite in the election race. 30% of Brazilians say they will vote for it.

Foreign left-wing leaders also expressed their support for da Silva. Among them are former presidents Michel Bachelet of Chile and Francois Hollande of France, as well as the Bolivian leader Evo Morales and 29 United States legislators, including Senator Bernie Sanders, who concluded in a letter: “the Facts of President Lula’s case give us reason to believe that the main purpose of his imprisonment is to prevent him from participating in the upcoming elections.” 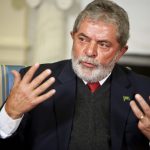