Bulgarian authorities reported the arrest of a man who is suspected of killing journalist Victoria Marinova. According to preliminary data, the deadly attack was not related to her work.

The body of journalist Victoria Marinova was discovered on Saturday after she went for a run on the banks of the Danube in Ruse, the fifth largest city in Bulgaria. A few days before, she had a program on TVN, a local channel that dealt with corruption. On October 10, 21-year-old Bulgarian Severin Krasimirov was arrested by German police near Hamburg on suspicion of her murder. 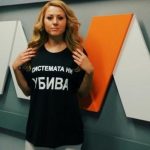 “We have enough evidence linking this man to the crime scene,” said Bulgarian interior Minister Mladen Marinov. According to him, DNA samples taken at a crime scene, coincide with DNA of the detainee, and also Krasimirov has a criminal record for scrap metal theft. The Minister said investigators talked to the journalist’s family and friends and added, “There’s no obvious connection to her work,” the Guardian reports.

Attorney General Sotir Tsatsarov said that Krasimirov was already wanted by the police because of another rape and murder, and added that he did not believe that the murder of Marinova was related to her work, suggesting that it was a “spontaneous” attack.

The fatal attack on the journalist was the third in the EU this year, the public came to a consensus that her death was related to journalistic work, given that her final broadcast included interviews with two journalists about corruption.

However, the Prime Minister of Bulgaria Boyko Borisov decided to refute these suspicions. “I’ve read monstrous things about Bulgaria over the past three days and it’s all not true,” he said. “As a country, we don’t deserve to be talked about like this.”

Some Bulgarian journalists were less convinced than they were that the murder was a pure coincidence and criticized the authorities for reducing the possibility of contract murder from the very beginning. “Victoria Marinova was not a professional investigative journalist, but she dared to talk about it and give others the opportunity to discuss it,” said Atanas Chobanov of the investigative organization “Buffalo”, whose journalists were in the last broadcast of Marina. He said that the portal has received “credible threats” in the course of the investigation.

However, many of Marinova’s friends and colleagues also began to abandon the theory that the murder was related to work. Her ex-husband Svilen Maksimov, Director of TVN, said in an interview that”all the evidence points to an absurd, terrible coincidence.”