In Brazil, anti-corruption actions were held, the reason for which was a Grand fire in the national Museum of Brazil, which was located in the building of the former Imperial Palace.

In Rio de Janeiro burned down the oldest, 200-year-old national Museum of Brazil, which kept more than 20 million the most valuable exhibits. “The country mourns the loss of irreplaceable treasures,” Time wrote. 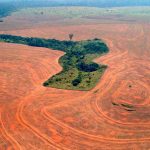 You may also like Brazil’s rainforests are threatened by corruption

The incident provoked riots in the ashes: to cool the ardor of activists who tried to break inside, the police had to use tear gas and light and noise grenades. The public blames the Museum staff for negligence, they blame the reduction of funding and the long-overdue need to repair the building, reminiscent of the peeling plaster and protruding wiring. One of the likely causes of the disaster is called a short circuit. Do not rule out arson. Due to lack of funds in the Museum there was no modern fire system, which would quickly put out the fire.

The Museum housed the largest collection of historical artifacts in Latin America, and the damage could be catastrophic.

For many in Brazil, the state of the 200-year-old natural history Museum has become a metaphor for what they see as the destruction of Brazilian culture and life in the years of corruption, economic collapse and poor governance. Employees of the Museum have repeatedly complained about the reduction of funding and dilapidated Museum building.

“It’s a crime that the Museum has been brought to this state,” said Laura Albuquerque, a 29-year-old dance teacher who was in a crowd protesting outside the gate. “What happened is not just regrettable, it is destructive, and politicians are responsible for these actions.”

The cause of the fire, which broke out on Sunday evening, was not known. Federal police will investigate as the Museum was part of the Federal University of Rio de Janeiro. But the protesters, commentators and the museums Director, said that years of government neglect left the Museum is so underfunded that its staff asked the sites to open the exhibition.

“Brazil has made football arenas a priority, not museums. Now the country without its past, without presence … and no future, ” wrote journalist Rafael Fontana on Twitter.

“The money spent on each of these stadiums – a quarter of it would be enough to make this Museum safe and bright,” said Deputy Director of the Museum Luis Fernando díaz Duarte. According to Reuters, the funding for the Museum from 2013 to 2017 amounted to 155 thousand 270 dollars, and in 2018 – only 23 thousand 700 dollars. 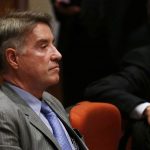