Brazilian president Temer is not going to G20 summit - Anticorr.media
Skip to content

According to the official sources and El Periodico the Brazilian president Michel Temer refused to participate in the upcoming summit of G20, which this year will be held on 7th and 8th of July in Hamburg.

Temer’s administration stays silent about the reasons behind their leader’s decision. However, it may have something to do with the ever growing corruption scandal surrounding Temer (see link at the end of this article) and the fact that he is the first acting president in the history of Brazil to be charged with serious crimes. In light of country’s chief prosecutor Rodrigo Janot accusations the disgraced president may have chosen to stay away from spotlight.
Evidence on which Janot based his charges come from testimonies of JBS executives with JBS being the biggest meatpacking company in Brazil. They told the police that Temer accepted bribes in exchange for facilitating tax breaks and sanctioning loans from state banks. It could be damaging for the country’s image to let Temer appear in front of top world leaders and countless cameras.
On the other hand, since the Supreme court decided to take action and forwarded the emerging case to the lower house of Brazilian Parliament, the fate of the president and his stained reputation is now in the hands of governmental officials who are themselves under investigation on corruption charges. And even if two thirds of those enmeshed in graft scandals vote for Temer’s prosecution, his vacant place would be temporarily (for 6 months) taken by the lower house of Brazilian Parliament Speaker Rodrigo Maia, who is also currently under investigation.
“It’s the corrupt judging the corrupt,” said David Fleischer, professor at the University of Brasilia, who possesses expertise on Brazilian politics, – “If this drags out for four or five months, we may see a lot of new accusations. It will build up and add gasoline to the fire”.
Therefore, Temer’s decision to disregard one of the if not the most important gathering of 2017 may well be motivated by his willingness to concentrate on a certain task at hand: to secure allies in Parliament and ensure the aforementioned vote goes in a particular direction. This year G20 summit will be chaired by Germany, which is the third time this happened since 1st of December 2016. 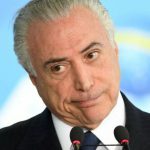