On Monday 3d of July 2017 the Brazilian administration announced that president Michel Temer will be going to G20 summit that this year is happening on the 7th and 8th of July in Hamburg, Germany.

Brazilian president had previously (see link at the end of this article) refused to join other world leaders at this upcoming event. It is still unclear when he will fly to Germany, but everything points to the 6th of July. As with the previous refusal the reasons behind this decision are kept under wraps. Globo speculated that various experts and governmental aides convinced Temer to go.

Brazilian leader is still under investigation that shook the country last week: Chief Prosecutor Rodrigo Janot accused Temer of receiving bribes from the Brazilian largest meat packaging company JBS SA. Janot went to Supreme Court with proof on paper and the Supreme Court chose to act on it.
It is now the job of the lower house of Brazilian Parliament to decide Temer’s fate. If two thirds or 342 votes will be cast for the disgraced president’s prosecution, he will be removed from office for at least 180 days.
This monday during a radio interview Temer stated that he is confident the Parliament is behind him. Brazilian leader maintained he has enough votes to smash Janot’s charge: “The charge is weak and inconsistent”, he said. Janot himself announced over the weekend that he has more than enough proof of Temer’s wrongdoing. 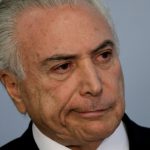