South African President Cyril Ramaphosa said he was ready to appear before the state Commission to investigate the case of the so-called “capture of the state” with “great pleasure” if he is asked to do so.

“Seizure of state” in South Africa-a criminal case involving accusations against former President Jacob Zuma, as well as representatives of the circle of his special Trustees and brothers-entrepreneurs Gupta originally from India, Allafrica reports.

The head of state in the course of answering the questions of the National Council of provinces, the upper house of Parliament asked the corresponding question of the Deputy from the Democratic party Katy Labuan. “You could not have been unaware of the capture of the state, especially since the Alliance brought this information to your attention every time you, as a Deputy President, appeared before Parliament.” She said that Ramaphosa was running state-owned enterprises at a time when the state capture was flourishing, but Ramaphosa did nothing to stop the process. The Deputy asked the President whether he will appear before the Commission if he is called. 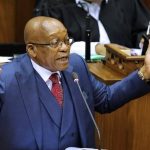 Ramaphosa said that “state capture” is an issue that affects all South Africans, and that some of the things that came out of Committee, chaired by Deputy chief justice Raymond, Songo, surprised and shocked all.

The Commission came after the report of the former public protector tuli Madonsela, which appeared in November 2016. According to its content, the Gupta brothers, thanks to their special personal relations with President Zuma, had enormous political influence in the country and actively used it for personal enrichment. A special Commission to investigate the charges included in the text of the document was established in January 2018 at the request of the high court in Pretoria. It began its work on August 20.

Zuma at the request of the leadership of the ruling party “African national Congress” 14 February agreed to voluntarily resign from the post of head of state, after which he was elected Ramaphosa. The Gupta brothers soon left South Africa and now live outside. Lawyers of the infamous family argue that their clients are not going to return to the country, but are ready to submit their written evidence to the Commission, or to take part in its work through direct video communication channels.