Kenyan referee Aden Marva due to suspicion of receiving a bribe of $ 600 will not be able to participate in FIFA 2018.

Earlier, the BBC published a video about corruption in African football. On the screen except judges from Ghana,” was lit ” and the referee from Kenya. The fact of receiving a bribe, he deprived himself of refereeing at the world Cup 2018, which starts on June 15 in our country.

Video journalist from Ghana Aremeyaw ANAS, posing as a football official from Ghana, tried to bribe the referee Aden Marwa during the African national championship. He agreed to a bribe. According to investigators, the video could be made during the Africa Cup 2018, which was held in Morocco in January and February. Ghana then took fourth place. In the video, you can hear the judge say to the person who gave him the money: “Thank you for the gift, but the most important thing is friendship, acquaintance with each other.” 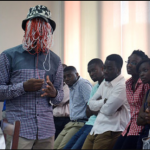 You may also like Ghana: the author of the film about corruption was accused

The video shows Marva, along with dozens of other match officials and senior football administrators, receiving money, in violation of FIFA‘s code of ethics. So it it official referee form complete with the logo of the FIFA.