The attorney General of Malta has removed from the Prime Minister Joseph Muscat all suspicions of involvement in the activities of an offshore company.

In 2017, anti-corruption journalist Daphne Carwan Galizia published the results of the investigation, which was the last in her life, in which the Prime Minister of Malta was accused of involvement in offshore companies, writes Euobserver. In October 2017, she was brutally killed: she was blown up in her own car. Galicia’s informant was Russian Maria Efimova: she claimed that the private Bank Pilatus, where she worked, was used to transfer funds to Maltese politicians and children of the President of Azerbaijan.

Subsequently, other media conducted their own investigative journalism, and eventually broke a loud corruption scandal that damaged the reputation of the Maltese Prime Minister Joseph Muscat. 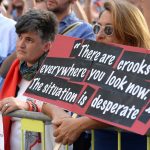 On 22 July, Muscat said that the investigation did not reveal any evidence of corruption or money laundering from Azerbaijan through the accounts of Pilatus Bank. He said that his wife, closest assistant Kate Chambry, Minister of tourism Conrad Mizzi, as well as former European Commissioner of health John dally, were also cleared of suspicion.

“There was no evidence of any suspicions about my wife Michelle, menia, my family or people close to us,” he said.

Muscat claimed his innocence everywhere, noting that he would resign if at least an “ounce of truth”was found in the allegations. He said that the documents were falsified and that the investigation could not agree on the versions put forward by Efimova and Karuna Galicia.

Muscat now wants a former leader of the opposition Simon Busuttil “withdraw from all positions that he holds in Malta and abroad” for having supported the demands of corruption.

According to Sven Gigold, a German MEP who participated in the corruption investigation in the European Parliament in Malta last December, said that although he was not convinced of the truth of Efimova’s accusations, a long list of questions remains unanswered.

“Indeed, it would be important to know who falsified the documents. However, this investigation does not answer the key questions of the Malta rule of law report,” he said on Twitter.

Another opposition MP said that had lost important evidence when the Chairman of the Bank Pilatus Seyed Ali Sadr Hasheminejad left the country soon after Caruana Galicia issued its report.