Supporters of former Brazilian President Inacio Lula da Silva, who is in prison, have stopped a 26-day hunger strike in support of the former head of state.

As participants of the action reported, they reached the goal. Activists also called on the Brazilian leadership to implement the decision of the UN human rights Committee, according to which Lula da Silva should be given the right to run for the post of head of state, reports Prensa Latina.

However, only in September will the public be able to know whether da Silva will take part in the presidential race. From 7 to 13 September, the Supreme court will hear an appeal filed by the defence of Luis Inacio Lula da Silva.

Lula da Silva, who is accused of other corruption episodes, according to opinion polls, is a favorite in the election race. 30% of Brazilians said they would vote for him.

Recall, from April 2018, Lula, who served as President of Brazil from 2003 to 2010, is serving a prison term after he was found guilty of corruption. Lula denies all charges. The court of appeal upheld the ruling in January and increased Lula’s prison sentence to 12 years and one month. He became the first ex-President of Brazil, who was sentenced to prison on the results of the criminal process. 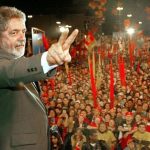 You may also like Convicted of corruption, the former President of Brazil topped the popularity rating in the presidential race