In the US, a major corruption scandal broke out in the structures of the Navy: Federal prosecutors announced charges of bribery and fraud to three retired sailors, including an officer who allegedly took part in a wild two-day party with prostitutes in Tokyo, which cost 75 thousand dollars.

A Grand jury in San Diego accused the captain of the resignation of David W. Haas in receiving bribes in the amount of 145 thousand dollars from the Malaysian Leonardo Glenn Francis, who was nicknamed Fat Leonard in the media.

You may also like Vietnam: ex-soldier sentenced to 12 years in prison for abuse

Ricarte Ikmat David (61), a Junior officer of the senior police chief who lives in the Philippines, and 46-year-old Brooks Alonso parks, a senior retired major who lives in Naples, according to the Ministry of justice, were also involved in the case, the Washington Post reports.

After the jury meeting, there was no clear understanding of whether the accused would file claims, nor was it clear whether David and parks would voluntarily return to the United States to face charges, or whether Federal officials would have to make efforts to extradite them.

Federal investigators have been scrutinizing Haas ‘ behavior since the corruption scandal became public five years ago. Shortly after Francis was arrested in San Diego in September 2013, Navy officials announced that Haas had been suspended from his military duties and had become involved in the justice Department’s criminal investigation. But the authorities did not provide any further updates on his case until last week. Haas retired from the Navy in September 2016 and now works for the Federal emergency management Agency, according to his LinkedIn profile.

“Captain Haas is innocent of the charges, and we will defend the case in court,” said his lawyer.

According to the indictment, Haas received bribes from Francis in 2011 and 2012, when the captain was appointed Director of naval operations in the 7th fleet Navy, based in Japan. Instead, Haas helped his company Glenn Defense Marine Asia to do business. This company has been providing American ships in Asian ports for over 20 years. The investigation found that the accused in this case, the us military, using connections in the command of the fleet, learned about the movement of warships and submarines of the United States, and then redirected them to the ports where Francis worked. In return, he threw parties for them.

In June 2012, Francis paid more than $ 75,000 for Haas and other naval officers to spend two “extravagant” days in Tokyo, where they visited several clubs with prostitutes. And in November 2011, Francis allegedly spent more than 20 thousand dollars on Haas and other officers, so that they could have lunch at the Ritz-Carlton and spend the evening with the girls of easy virtue.

Haas was charged with receiving bribes for 40 thousand dollars from Francis, as well as other gifts. Parks is accused of taking bribes in the form of luxury hotel rooms, airline tickets and other gifts from Francis. 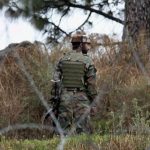 Francis pleaded guilty to bribery and corruption in 2015 and has been working with investigators ever since.

To date, criminal charges have been brought against 32 accused who worked for the Navy or the Maritime police. But this is only part of the people seen in the scandal.

Separately, the Department of justice provided the Navy with a dossier of 550 people who had contact with Francis, including some 60 admirals, to determine whether they had violated military law or ethics.