One of the judges of the Supreme court of Kenya became involved in the criminal case of corruption. He is suspected of embezzlement, abuse of office and tax evasion.

The judge is under investigation for several months after the Kenya revenue Authority (KRA) reported to the Prosecutor’s office suspicious movement of large amounts of money in several Bank accounts of the judge.

Representative of the highest branch of the judiciary has faced numerous charges of embezzlement, abuse of office and tax evasion. In addition, he is suspected of involvement in the bankruptcy of a large Bank after he received there a loan of 12 million Kenyan shillings.

According to the publication Nation, state prosecutors discussed the possible arrest of a judge with the judicial service Commission (JSC). The sources mentioned that the investigation and legal analysis had been completed. However, the identity of the judge has not yet been disclosed. The secrecy of the investigation in this case was unusually high, as judges are legally protected by law.

The details of the case emerged a few days after it was reported that President Uhuru Kenyatta received a secret dossier, which contained information about high-ranking government officials. 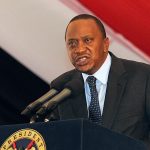 You may also like Kenya: 1000 senior Government officials sent on leave

In June, chief justice David Maraga said there would be no “sacred cows” in the fight against corruption in the judicial system .

“We have no place for corrupt judicial officials. Know that you are alone if you are corrupt and do not expect sympathy, mercy or protection from my office,” Maraga said.