In New York, the police were late in the protection of brothels
Skip to content

Television station WABC-TV reported that the arrested officers – three sergeants, two detectives and two officers are suspected of illegal actions. It is reported by OCCRP.

The investigation focused on the work of a retired detective who, according to police, ran several brothels in Brooklyn and Queens with his wife, who allegedly worked as a prostitute.

Internal Affairs officers raided the locker of one of the arrested detectives and confiscated its contents. The detective worked at the 72nd precinct in sunset Park, Brooklyn.

Two other officers, including a detective who had worked for five months in the interior Bureau earlier this year, were stripped of their weapons and shields and assigned to administrative service. 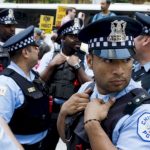