In Romania, thousands of people took to the anti-corruption campaign
Skip to content

Thousands of people in Romania have become parties to the anti-corruption campaigns in Bucharest, dedicated to the third anniversary of the tragedy that occurred in a nightclub Сolectiv. Then the fire killed 65 people.

The fire in the club Colectiv claimed the lives of 65 people, which caused mass street protests and eventually led to the collapse of the social democratic government. But the party returned to power in early 2017 after the parliamentary elections, according to the Globe and Mail. 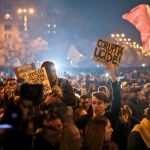 Since then, the government has sought to weaken anti-corruption legislation and replace law enforcement officials, which has also led to public protests and concerns about the rule of law by the European Commission and a number of diplomats. We will remind, earlier it was dismissed Laura Kovesi – the chief Prosecutor of the Directorate for anti-corruption (DNA) of Romania. Romanian President Klaus Iohannis, who supported the Prosecutor, was forced to dismiss her, following the decision of the constitutional court. Later, she was appointed to the position of delegated Prosecutor of the service of supervision and control at the Prosecutor’s office at the Supreme court of cassation and justice.

It is estimated that 2,500 people carrying flowers and candles went to the club where the fire broke out, Waving, saying that the country is still ill-prepared to prevent or cope with another tragedy. Hundreds have lit candles in several other cities.

“It was a tragedy caused by corruption, primarily by a corrupt system created by politicians who vote to escape condemnation,” said Mihai Ruben, one of the participants in the March.  “Some people die and others are above the law.”

The fire occurred during a concert of the rock band Goodbye to Gravity, when the fireworks ignited foam insulation that caused a stampede to the exit. Investigation of prosecutors showed that the club was not equipped for fireworks and was not equipped with emergency exits.

Bucharest officials granted the club a licence to operate, and the security inspectors allowed the club to function, even though they knew that the club was not equipped according to the rules. The trial is still ongoing.

65 people were killed and more than 100 injured. Patients affected by the fire were then treated in hospitals that lacked the necessary facilities, a number of them were infected, and some of the victims are still far from the recovery stage.

Colectiv is not just a fire

“Life doesn’t move on, and Colectiv isn’t just a club fire,” said Alexandra Fernea, one of the patients at the burn center. “Colectiv takes place every day in many Romanian hospitals, institutions and souls.” According to other participants of the action, it is very painful to see that for three years almost nothing has changed: “it is Outrageous that after so much time the guilty have not been established. People are already out on the street immediately after the fire, and demanded justice.. looks like they didn’t get it.”