In Slovakia, called the amount of contract murder of an anti-corruption journalist
Skip to content

The possible customer of murder of the journalist from Slovakia Jan Kuchak was among the suspects detained by police last week. Investigators found that the murder was given 70 thousand euros.

In February Ian and Martin Kuchak Kushnirova was shot at close range in his house. The journalist was investigating the links of the Italian mafia with officials from Slovakia. 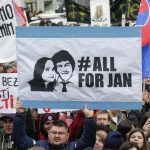 According to investigators, the murder of the journalist was ordered for 70 thousand euros. According to Reuters, 50 thousand euros were provided in cash, and the rest went into debt. Law enforcement authorities identified the detained woman only on her initials-and told that is the person who is the customer of murder. Slovak media reported that this woman is Alena Spasova, which is allegedly linked to businessman Marian Kochner, and he Kochner is the godfather of her daughter.

According to the Slovak journalist, the businessman was detained in the summer for tax crimes, but was released soon after. One of the publications reported that Kochner had previously threatened Kuchak.

A woman identified as a murder has been charged with an extremely serious crime for complicity in the murder, according to Radio Free Europe/Radio Liberty . In the passage it is reported that the lawyer of the family of Kuchak said she was probably the intermediary.

“We have more steps that we want to take, so there is a high probability that there will be more charges,” Prosecutor Jaromir Chiznar said at a press conference on Monday.

The murder of Kuchak and Kushnirova led to nationwide protests in March and the resignation of the Slovak government led by Robert fico.

Kuchak was a journalist who dealt with the topic of fraud with EU money and possible involvement in this Italian mafia of the clan Ndrangheta. His final work was published posthumously.