The former head of foreign intelligence of Malaysia, was arrested on suspicion of corruption
Skip to content

Hassan Abdul Hamid, the former head of Malaysia’s foreign intelligence, was arrested on suspicion of involvement in the theft of funds intended for the General elections in may.

The former head of Malaysia’s intelligence organization was an ally of former leader Najib Razak. Currently, the police suspect that she and her friends have stolen huge amounts of public money, according to channelnewsasia.

After the elections, senior officials with links to the former government, the attorney-General and the head of the civil service are being purged.

Hasana was arrested by anti-corruption investigators who are investigating the theft of election funds from the Prime Minister’s office, and reportedly amounts to millions of ringgit. While she was detained for five days on suspicion of abuse of power.

This week, anti-corruption investigators arrested seven other officers from the Hassan Agency, who worked directly in the Prime Minister’s office, as part of the investigation into the missing money.

Recall that in July was arrested ex-Prime Minister Najib Razak in the case of the disappearance of several billion us dollars from the accounts of the Fund founded by him. Najib himself denies any wrongdoing. 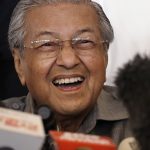