Former Argentine President Cristina Kirchner was called for questioning because of data on the transfer of bribes to 56 million dollars. Experts compare the new investigation with the corruption scandal “car Wash” in Brazil .

On August 1, the local newspaper Nacion published the data collected by the driver of the Ministry of planning Oscar senteno, reports Aljazeera. One of the journalists of the publication in January 2018 was able to get the documents, including notebooks senteno. After processing the data, it turned out that the driver recorded all the information about the amounts of money he was carrying in 2005-2015. Senteno wrote down everything in his notebooks: names, amounts, and addresses where he delivered the money. According to data taken from these notebooks, it follows that the cash was brought to the presidential residence of QUINTA de Olivos and the private house of former President Christina Kirchner and several business leaders. Kirschner must appear before the court for questioning on August 13.

In the records of Centeno says that within 10 years, was transferred 56 million dollars.

Senteno himself was detained, he began to cooperate with the investigation.

Some experts in Argentina believe that this could be as large-scale scandal as the investigation “car Wash” in Brazil, and the judge wants to remove immunity from criminal prosecution of former President Kirchner. 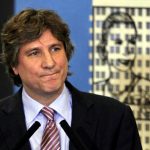