A court in the Sughd region of Tajikistan released journalist and captain of the KVN team in Tajikistan Khairullo Mirsaidov after serving nine months out of a 12-year prison sentence. Previously, he was found guilty of denunciation, embezzlement and forgery. Mirsaidov himself denies all charges.

In December last year, Mirsaidov was arrested for false information about corruption in the government and embezzlement of public funds. The regional court changed the punishment against Mirsaidov on all three articles, on which he was previously charged by the Khujand city court. According to the court, the cheerful and resourceful have to pay a fine in the amount of about 80 thousand somoni, he is also sentenced to a year of correctional labor. Under the corrective work assumes that Khairullo will be able to work where they want, and 20% of his salary for 2 years will transfer to the state budget, OCCRP reports.

The UN human rights office called the imprisonment of Mirsaidov “a clearly targeted measure against journalism and the right of the public to information.”

Marie Struthers, Director of Amnesty International in Eastern Europe and Central Asia, welcomed the proposal but said: “We will continue to urge the Tajik authorities to fully drop charges against Khairullo and to conduct a thorough, impartial and independent investigation into his allegations of corruption in the government.”

We will remind, Khairullo Mirsaidov was detained in December 2017 after a month before he sent an open letter to the President of Tajikistan about the facts of corruption in the structures of power.

Earlier, the embassies of great Britain, Germany, France and the USA in Tajikistan appealed to the authorities of the Republic to reconsider the verdict against the head of the KVN team and journalist Khairullo Mirsaidov. 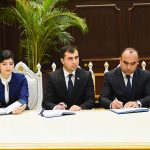 You may also like Is Tajikistan Really Clearing Corruption From the Anti-Corruption Agency? Not quite.