In China, strengthen control over the production of drugs after the vaccine scandal
Skip to content

Chinese authorities are trying to contain public outrage over the scandal with vaccines against children’s diseases, affecting hundreds of thousands of children. Experts believe that the quality control system of medicines and corruption are to blame.

In China, a large-scale investigation began against five high-ranking employees of Changchun Changsheng Life Sciences, around which a scandal broke out due to violations in the production of rabies vaccine.

President XI Jinping called the scandals “terrifying,” Inkstonenews reports. He called on the relevant authorities of the PRC to pay special attention to this case and promptly inform the public about the progress of the investigation, as well as to call all the perpetrators to justice as soon as possible. He called Changchun Changsheng life Sciences ‘actions” illegal, disgusting and shocking”.

Last weekend, the authorities also reported that another vaccine manufacturer-the Ukhan Institute of biological products – sold more than 650 thousand “substandard” DPT vaccines to three different provinces of China. DPT vaccines are used to prevent diphtheria, pertussis and tetanus. Despite the fact that no one has been affected by the vaccines so far, parents of children who have been vaccinated with improperly formulated vaccines blame corruption and weak law enforcement for being at risk. Government-subsidized DPT vaccine is available for infants throughout the country. Newborns are usually given three doses of this drug at intervals of three months.

According to the publication, the blame for the quality control system of medicines in the country: it can not cope with the control of pharmaceuticals.

One of the former employees of China’s state food and drug administration (CFDA) (the official drug testing Agency in China), said that there are not enough employees to ensure that the drugs meet the standard. 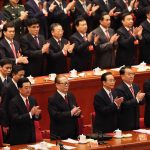 “We are the only institution in China that is able to test the quality and effectiveness of vaccines,” the source said. – China produces more than one billion vaccines each year. Gap is huge.”

China, like many developed countries, uses the lot release system to test vaccines. According to international standards, about 5% of samples are taken for control tests, and even those that have been tested are not tested for all performance indicators.

The former official said that without enough staff to carry out random checks, the quality of vaccines depends largely on the willingness of companies to comply with the rules.

The source added that the companies needed more employees to conduct random inspections.Part of the problem in China, critics say, is the small amounts of fines for companies that have identified non-standard vaccines.

Corruption around the head

Previously, the court sentences showed that officials for permission to use the vaccine take bribes in the amount of one thousand to tens of thousands of dollars.

In 2007, the former head of the Chinese drug regulator, Zhang Xiaoyu, was executed for receiving a bribe of $ 850 thousand to give permission for hundreds of unverified drugs.

Another official from Beijing, Yin Hongzhang, received bribes in the amount of 440 thousand dollars from nine pharmaceutical companies to speed up the coordination of their vaccines. Last year he was sentenced to 10 years in prison.

It was also found that local authorities buy vaccines from non-certified dealers in exchange for kickbacks. China began to restrict the purchase of vaccines to provincial governments in 2016 in order to reduce corruption.