Slovak police arrested several suspects in the murders of a journalist who spoke about corruption in the government, as well as his fiancée.

After a wave of protests caused by an improper investigation into the murder of Slovak journalist Jan Kuciak and his fiancée, the authorities reported on the first arrests. Prime Minister Peter Pellegrini said on Facebook that he’s happy to receive the news: “Police have arrested suspects in the murder of two innocent young men.” It is reported by CBC.

Pellegrini said the investigation is a “priority” for his government. Daniel Lipsic, the lawyer representing the family of Jan Kuchak and Martina Kushnirova, said the arrests were made Thursday morning.

Kuchak, who wrote about political corruption in Slovakia, was found murdered along with Kushnirova at home outside of Bratislava on 21 February. The Slovak authorities said that they believed that it was a contract murder related to the work of Kuchak, who was investigating possible large-scale corruption in the government and the links between politicians and Italian criminals.

The murder led to mass protests in which participants called for the resignation of Prime Minister Robert fico and interior Minister Robert Kalinak, as well as the head of the Slovak police Tibor Gaspar.

Kuchak investigated the alleged role of the Italian crime syndicate “Ndrangetta” in the theft of funds allocated by the EU for the development of agriculture in Slovakia. He also found connections between Slovak officials, mainly the ruling SMER party, and Italian families with links to the Sicilian mafia. His colleagues published the results of his investigations after his death.

Slovak police accused of destroying evidence, lack of transparency and improper investigation of the death of Kuchak. 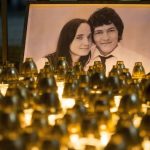