Former Prime Minister of Pakistan Nawaz Sharif, sentenced to 10 years in prison, appealed the sentence. He was arrested immediately after returning to his homeland, but Sharif intends to go on bail in anticipation of the review of the case.

The appeal against the decision on 10-year imprisonment was filed in the high court of Islamabad, said the press Secretary of the founded Sharif party-Pakistan Muslim League-Mariam Orangzeb. She said that Nawaz Sharif intends to appeal his conviction and sentences in respect of their family members, NDTV reports.

Police in Pakistan arrested Nawaz Sharif on 13 July, who was sentenced to 10 years in prison in a corruption case, immediately after his return to his homeland. The former Prime Minister returned to the country with his daughter Maryam Nawaz from London,where his seriously ill wife is.

After his arrest, Sharif was placed in Adial prison in Rawalpindi. According to Shahbaz Sharif, the brother of the former Prime Minister, who visited the former head of the government in custody, the prisoner is in “terrible” conditions. According to him, Nawaz “did not even give the newspaper to read, his mattress was on the floor, and the toilet is very dirty, there is no air conditioning in the cell.”

Last week, the former head of the government was sentenced to 10 years in prison and a fine of 8 million pounds. The decision was issued a year after the Supreme Court of Pakistan disqualified him for his inability to declare his source of income. The case was initiated after the publication of the Panama papers, which resulted in the discovery of an expensive and undeclared property in London owned by the Sharif family. 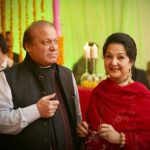 You may also like Pakistan: Ex PM Nawaz Sharif’s Wife Wins his Seat in the Parliament