The Nairobi County government has begun to prosecute its law enforcement officers suspected of taking bribes from the public.

The Governor of Nairobi County, Mike Sonko, stated that his administration would not condone police officers who extorted bribes from Nairobi residents and promised to arrest the perpetrators and suppress the activities of those who had been convicted of offences, Nation reports. 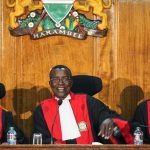 “The man had no choice, he took 2 thousand Kenyan shillings – all he had. He gave this money to police officers, and only then they left his car, – the Governor Sonko told.

Members of the public who witnessed the incident, recorded everything that happened, he added.

Sonko also said that they had started thorough investigations to track down the officers.

“Once again, I encourage Nairobi residents to remain vigilant and to report all cases of bribery and corruption. I am sure that by working together, we can end this,” he said. He also urged Nairobi residents not to bribe officials, but instead to report it to the authorities.

Residents who are victims or witnesses of such incidents are urged to provide the location of the incident and the police vehicle registration number to the number provided by the County government for rapid response.

“We also urge the public to send a message to the same number if they find that the County car is being used in this illegal activity anywhere in Nairobi,” Sonko said.

The head of the municipality condemned the fact that, despite his previous warnings on the matter, a number of his district police officers were still extorting bribes from innocent Nairobi residents.

“I am shocked by the publication of the public that some district police officers are still extorting bribes from hardworking citizens,” said Sonko.