In the New York police Department, the biggest corruption scandal in recent years has erupted: three sergeants, two detectives and two officers of the Department were accused of organizing prostitution, as well as illegal gambling.

“As we sit here today, the reality is that due to a number of our members in different ranks, the NYPD shields they wore have faded,” police Commissioner James P. O’neill said at a press conference Thursday. – They ruined their own career and reputation. More importantly, they perverted the great work of tens of thousands of honest cops. And it should make every COP who’s ever done this job angry.” 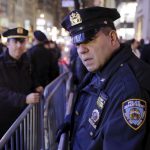 You may also like In New York, the police were late in the protection of brothels

In General, three sergeants, two detectives and two ordinary police officers of  New York were involved in the enterprise on the organization of prostitution. There were also 26 civilians arrested, and at least 13 others. Officials said that while there is no fear that other police officers will be arrested if there is no new information, writes the New York Times.

The leader of a gang of cops
Led the group 51-year-old Ludwig Paz, a former Vice-detective. He used his knowledge of the police Department to his advantage. “The evidence in this case is staggering,” Bradley Tsane, a senior assistant district attorney for the case, said. “We have thousands of hours of footage.”

All seven police officers pleaded not guilty and were released on bail on their own admission. The courtroom was full of officers ‘ families, some crying.

During the trial prosecutors told how Ludwig the Groove used tips and inside information from the police, to prevent the investigation on the fact of prostitution in public houses, and he hired the officers as doormen and bodyguards.

One defendant, detective Rene Samaniego, was named Canon the worst offender. According to him, it transferred to a Groove and employees of brothels physical descriptions of secret officers who had to visit prostitutes to catch them in crimes. “His behavior was egregious,” said Mr. Zane. It is beyond the scope of any other officer who is accused of here today.” For services detective Samaniego paid regular monthly fees of $ 500. While the investigation into corruption continued, the officers involved arrested prostitutes in the course of their work. So, detective Samaniego arrested a woman in 2017 after she offered him sex for $ 100.

Prosecutors said Groove led gruppirovku with his wife, Arelis Peralta and two step-daughters, Carelis Guzman and Aribel Guzman, living with a couple in Queens village. All three women also pleaded not guilty. Women are welcomed by customers in the public houses and handled the cash that contraband was transferred to the Dominican Republic.

For many years, accused officers have been charged with illegal arrests and complaints of excessive actions.

In his remarks in court, O’neill repeatedly called the case as treacherous: “These criminal acts involving people who raised their hands and took an oath to defend ideals, more than they themselves, distract from everything we have achieved, and confirm the doubts of those who Harbor distrust of the police,” O’neill said.