Deputy Supreme court of Kenya Philomena Mwilu was arrested on suspicion of corruption, non-payment of taxes and improper relations with the local Bank, which is now wanted, the police and the Prosecutor General’s office of the country.

The Director of criminal investigation, George Kinoti, told Reuters,”I can confirm the arrest of the Deputy chief justice.” 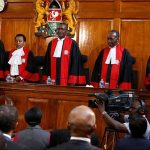 Mwilu was brought to trial on 28 August, she was charged, after which she was released on bail of 5 million Kenyan shillings ($49 thousand). Then chief justice Lawrence Mugambi postponed the hearing until Wednesday morning.

The detention of the Deputy chief justice was the largest detention since the beginning of the anti-corruption campaign in the country.

“Lady Justice Mwilu … I accepted gifts in the form of money, which undermined the credibility of her office,”- said the representative of the Prosecutor’s office of Kenya Noordin Mohamed Haji.

He said that Mvilu also received “the execution of security belonging to the Imperial Bank, now under oath, under false pretenses” and “fully obeyed the law”, citing the fact that he said she did not pay tax. Hajji did not provide any details.

“I came to the conclusion that the evidence is sufficient for a reasonable prospect of persuasion, and in the public interest, that criminal proceedings should be preferred,” he said.

Recall, the judge was under investigation after the Kenya revenue Authority (KRA) informed the Prosecutor’s office about the suspicious movement of large sums of money in several Bank accounts of the judge. Representative of the highest branch of the judiciary has faced numerous charges of embezzlement, abuse of office and tax evasion. In addition, he is suspected of involvement in the bankruptcy of a large Bank after he received there a loan of 12 million Kenyan shillings.