The Minister of internal Affairs of Albania, Fatmir Hapag resigned in the Wake of recent large-scale operations against organized crime and anti-corruption investigations.

Prime Minister EDI Rama said that he had accepted the resignation of the Minister, but did not explain. Hafaje resigned after a recent major operation in which more than two dozen members of organized criminal groups, including two former members of the ruling Socialist party, were arrested, the Washington Post. writes.

Khafaji wrote on the Facebook page of the Ministry of internal Affairs that he voluntarily resigned and cited “a very important success of the Agency in strengthening the rule of law in the country.”

Rama appointed sander llesha, a former military official, to the post of interior Minister, saying that the new Minister will bring “new positive energy”to the post. The President and the Parliament must approve the Lesha.

The opposition Democratic party called the resignation Chafage “an important step in our struggle to clean up crime policy.”  Predecessor Chafage, Saimir Tahiri, is suspected of corruption alleged involvement in drug trafficking. 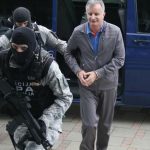