On 4 August there was an assassination attempt on the President of Venezuela Nicolas Maduro with the use of drones with explosives. The event took place during the speech of the head of state in Caracas on the occasion of the 81st anniversary of the establishment of the national Bolivarian guard. As a result of the incident, seven law enforcement officers were injured, Maduro himself and members of the country’s top leadership, who were next to him, were unharmed. Opposition leaders expressed fear that Maduro uses the assassination as an excuse for further pressure on opponents.

One drone intelligence agencies managed to neutralize, the second crashed into an apartment building about two blocks from the place where Maduro made a speech in front of hundreds of soldiers.

Who launched the drone attack?

The Venezuelan government claims that Maduro’s political opponents conspired with criminals from Miami and Bogota (Colombia) to organize the murder of Maduro. They have not yet offered any real evidence to support this statement, and opposition leaders accuse Maduro of using the attack as a pretext to crack down on his critics.

On Sunday, authorities reported that they had detained six people, whom they called “terrorists and murderers” – in connection with the attack. Among the detainees were a person who participated in the protests against the government in 2014, as well as a man who had previously been issued an arrest warrant for an attack on military barracks.

The Colombian government has denied any role in the assassination attempt.

Maduro, accusing the US of supporting his opponents, called on President Donald trump to bring to justice”a terrorist group”.

John Bolton, Trump’s national security adviser, said he would like to receive convincing evidence in support of Maduro’s statements.

“If the Venezuelan government has solid information they would like to provide us and the data would show a potential violation of US criminal law, we would seriously consider these facts, “Bolton said in a transmission to Fox News Sunday.

What is the political and economic situation in Venezuela?

Venezuela is in the midst of an economic crisis , which experts call a more difficult situation than the United States during the great depression.

This year the inflation rate will reach 13 thousand percent. The lack of food and medicine and the growing crime rate are forcing refugees to leave the country. More than 600,000 Venezuelans had emigrated to Colombia, and Brazil had declared a state of emergency because all Venezuelans were fleeing to that country.

Maduro is seen by the United States and other democratic countries as a corrupt left-wing dictator who imposes strict control on his people and the press. He won the presidential election in may, but the process was widely seen as a falsified farce .

The trump administration imposed new economic sanctions on Venezuela immediately after the election, trying to stop Maduro from selling off public debt to enrich himself. 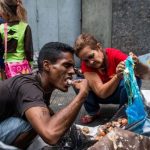 You may also like Venezuelan Journalists Flee After Receiving Threats

What can happen next?

The interior Minister of Reveal said, what could be more arrests. Critics fear an even greater state crackdown on Maduro’s political opponents.