In Thailand 65 officials suspended from work
Skip to content

The Department of social development and cooperation (DSDW) has suspended the work of 65 high-ranking officials across the country to facilitate the investigation of alleged corruption involving hundreds of millions of baht from public charities.

In Thailand, the investigation into the theft of state funds intended for the program to combat poverty continues. In order to ensure that the investigation was not hindered, the government decided to suspend 65 high-ranking officials who manage the regional centers responsible for the protection of the poor and the poor, nationmultimedia said.

NAPA Settakorn, head of the Department of social development and cooperation (DSDW), which is responsible for the operation of these centers, said that the suspension of officials need in order to help investigators to operate without barriers in cooperation with colleagues from the Commission on combating corruption in the public sector (PACC).

The PACC has appointed a Subcommittee to investigate the alleged abuse of public charitable funds, which covers 59 of the 75 centers managed by the DSDW.

Previously, the Organization for combating money laundering seized 88 million baht belonging to the former Secretary of the Ministry of social development and security, as well as 11 other high-ranking officials after the beginning of the investigation on corruption in the public welfare funds.

NAPA said that its Agency had also taken disciplinary action against 14 centres after PACC had provided the names of 96 officials who had allegedly committed offences in the management of public welfare funds.

On 27 March this year, the Cabinet decided to take disciplinary and other measures against government officials accused of embezzling funds.

At this stage, the investigation covers the alleged embezzlement of more than 100 trillion baht from the budget, which were intended for centres responsible for poor and poor citizens, as well as other units responsible for welfare and quality of life, centres for helping people living in remote areas, and centres coordinating village cooperatives “welfare projects”. 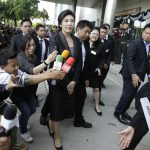