Rosma Mansor, the wife of the former head of the Malaysian Cabinet Najib Razak, who is under arrest in connection with a possible theft from the state Fund 1MDB also became accused in this case. She was charged with 17 episodes of corruption case.

66-year-old former first lady Rosma Mansor has been accused of using illegal income and failing to declare income tax as covered by the anti-money laundering act. She was arrested by the Malaysian anti-corruption Commission (IACC) and spent the night in detention, ABC reports. 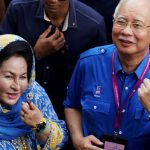 In court, the wife of the former Prime Minister pleaded not guilty and even expressed readiness to defend herself in court. In response, the judge gave permission to temporarily release Rosma Mansor on bail of 240 thousand dollars. Mrs. Mansor’s husband, Najib Razak, who is on temporary release, was present in court with his wife.

Najib Razak has been charged with 32 incidents, ranging from money laundering to abuse of power and criminal breach of trust. Both spouses are accused in the case of multibillion-dollar theft from the state investment Fund 1MDB.

Initially, it was unclear whether Rosma’s charges were related to 1MDB, but her arrest was carried out after three rounds of interrogations of anti-corruption agents on the Fund. Earlier, the us authorities said that more than 4.5 billion dollars were illegally appropriated.

The daughter of Najib Razak and Romy Mansor wrote a post on Instagram c criticism of the actions of the authorities: “I can take action against the person who was in power, but to endanger women who are close to him, is too much too much,” she said, referring to the recent police RAID on the home of the mother of Najib and Resacas, as well as her grandmother, mother Romy Mansor.

Note that the majority of Malaysians were outraged by the fact that the expremier was seized cash and valuable items, including designer handbags from Hermes, Birkin, jewelry and watches – all in the amount of about 275 million dollars. Najib Razaak then stated that most of the seized items were a gift to his wife and daughter and had nothing to do with 1 MDB.