In Mexico are investigating the theft of $ 320 million: under suspicion ex-the Governor of the state of Chihuahua
Skip to content

Prosecutors in the Northern Mexican state of Chihuahua have initiated a new anti-corruption investigation into the fugitive former Governor and dozens of former officials of his administration.

A criminal case was opened on the fact of theft of public funds in the amount of about 320 million dollars in 2016, when the post of Governor was occupied by Cesar Duarte, reports Apnews.

The public Prosecutor’s office of Chihuahua stated that the investigation related to the complaint after the audit of documents of that period. According to the Prosecutor’s office, 43 former government officials led by Duarte are suspected of violations.

Duarte already has a number of warrants for his arrest. It is believed that it is located in the United States. Earlier this year, the Chihuahua government seized four ranches allegedly owned by the ex-Governor.

The former Governor of Chihuahua césar Duarte was considered a close friend of ex-President Meximerica peña Nieto. Among the party members Duarte over the years gained more and more weight, but in 2017, he fled to the United States, fleeing from corruption charges. In total, he is suspected of embezzlement for the years of the governorship of more than $ 300 million.

In January 2018, the Governor of Chihuahua Javier corral Hurado instructed the state attorney General to carefully deal with the facts of corruption that took place under Duarte. Jurado gave the Prosecutor’s office unprecedented freedom of action for a system where traditionally investigations are rare and in most cases affect officials only the lowest level, and that if there is a sanction “from above”. 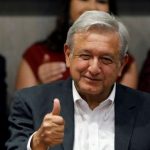